Added to some of my own old camera gear, I like to collect old, working, film cameras and equipment that makes me smile, here are just some of them. 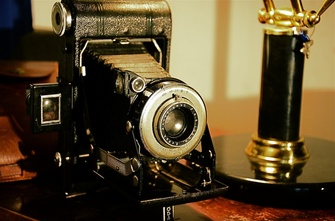 A pocket camera for big pockets, the Kodak Vigilant Six-20 folding camera made in 1939 -1949 is called a Six-20 because it uses 620 roll film. It shoots from 3.5ft to infinity. Uses a f6.3 Anastigmat lens with a Diomatic shutter. The Vigilant Six-20 does not have a rangefinder and instead it uses scale focusing. It has two viewfinders one on the body another one is the tiny  optical finder right beside the lens. Folding cameras like the Six-20 were quite popular from early 1900′s because the lens assembly and bellow folded into the camera. It become quite “pocket size”.  Called "folders" they were the smallest medium format cameras you can get.
I love the way the bellows look on these cameras. 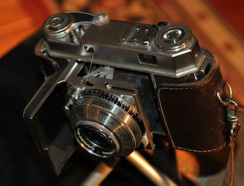 The Kodak Retina Type 016 IIa was a rangefinder-focusing, folding 35mm camera made by Kodak AG,
the German subsidiary of Kodak. The second in the camera series designated Retina IIa this was the Type 016 Retina IIa. It was manufactured from March 1951 to April 1954. At first, a Compur-rapid shutter was used. This model used a SYNCHRO-COMPUR shutter. The IIa had been modernized to include rangefinder  focus and excellent-quality f/2.0 lenses from Schneider and Rodenstock.

Here's more info on the Retina from a knowledgeable camera repairman in New Zealand
http://homepages.ihug.co.nz/~Srawhiti/retina2atype016.html
RANGEFINDER 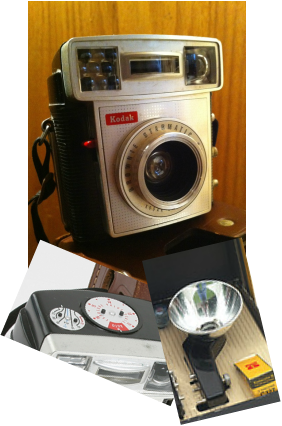 The Kodak Brownie Starmatic was a high-end part of Kodak's Brownie Star series, they were
made between April 1959 & August 1963. The front face looks like metal, the body is made of
molded plastic. The Brownie Starmatic was advertized to have an "Electric Eye" as did most "Si-fi Robots" of that era.
On the bottom is a Open/Lock switch which allows the film assembly to be removed for easy film loading. A second knob on the bottom is used for advancing the film. There is also a small tab that
acts as a third foot along with the other two knobs, this allows the camera to stand up straight.
The Brownie Starmatic was the first automatic Brownie camera. It has a fixed-focus Kodar f/8 lens
and "Instant" shutter setting along with Automatic Exposure control. Its built-in exposure meter
allows the camera to adjust between Kodak's exposure value scale numbers 12 to 16 or an Auto setting that used the built-in selenium light meter. This dial is found on the top of the camera next to another
dial that selects the ASA (ISO), film speed value ranges from 32 to 125. The Starmatic uses 127
roll film producing twelve 4 x 4cm negatives.
As with other cameras of it's age there is no bolt hole for a tripod mount. On the side of the camera there are three metal mounts for the flash attachment. This find came with it's brown leather camera case, but no flash unit. I have since purchased a flash unit to go with the Starmatic. 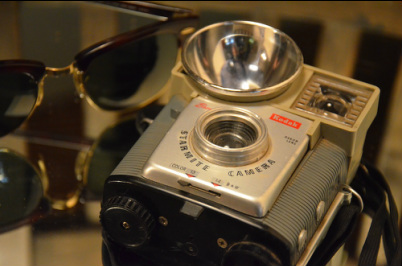 The Kodak Brownie Starmite was  another one of a very successful line of "star" cameras. It was a viewfinder camera made by Kodak in the early 1960s
- 1967. It took square, 4x4cm (3 1/2" x 3 1/2") images on 127 film. The only adjustment was a lever below the lens, giving EV 13 indoor/flash & EV 14  for daylight by adjusting the two position aperture. It had a built-in bulb flash for the small AG-1 type flash bulbs. It had a Dakon Fixed Focus f/11- f16 lens.
The camera is very similar to the Starmatic in construction with the addition of the flash unit. It also uses the 127 film. 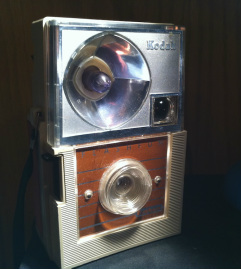 This was my very first camera.  When I was 10 years old I won it as a prize in a contest.
The Kodak Hawkeye Flashfun was made in Toronto between 1961 - 1967 by the Canadian Kodak Co.
A basic 12 exposure snapshot camera featuring a built-in flashgun for AG-1 bulbs. This camera shows a
family resemblance to the Kodak Brownie Fiesta, it uses Kodak 127 film and produces a 4 x 4 cm picture.
On the underside were the instructions  "HOLD CAMERA STEADY" . . . good to know. 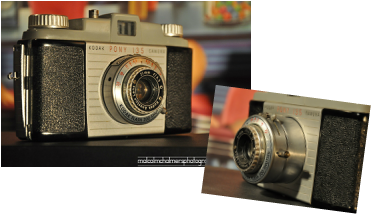 Made of Baklite with aluminum accents and sporting a nifty collapsible lens barrel, it used a 51 mm (f4.5 - 22) Anaston lens, pony was manufactured between 1950 - 1954.  Focus is achieved by guessing distance and turning the ring at the end of the lens barrel to the appropriate foot mark. The aperture adjustment was on the lens barrel next to the shutter speed (B, 1/25 - 1/200 ). Before taking a picture you had to pull the cocking lever down then press the shutter release. Film advance and rewind via the knobs on top of the camera flanking the viewfinder and shutter release. A flash could be connected to the lens.
At $34.75 (more than $350. today's money) the camera was not cheap, but it was a world of improvement over the Brownie Box cameras of that era. It used Kodak 135 film. 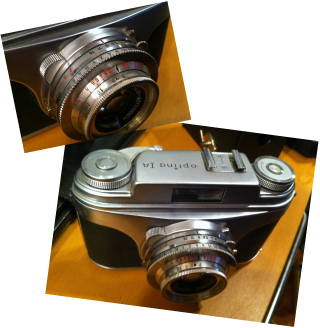 German made in 1956, it was the export version of the Arette IA. The Optina IA was a 35mm viewfinder camera made in Germany by Apparate & Kamerabau, introduced in ca. 1956, and produced with many model variations until 1963. This was
a cleanly-designed, well made camera featuring (among other combination's) an Isco-Gottingen Color-Isconar 45mm/f2.8 or Schneider-Kreuznach Xenar 45mm/f2.8 lens in a  9-speed Prontor-SVS shutter. 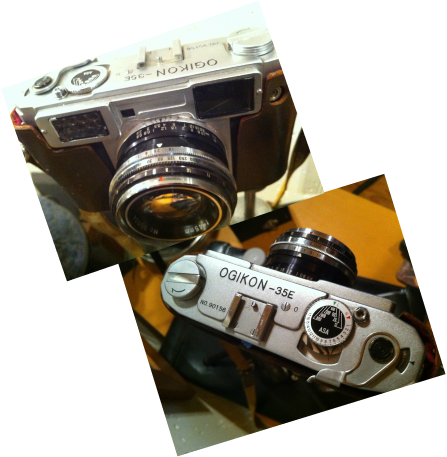 Made by the Royal Camera Co. in Japan between 1955 - 1960, re-branded and sold by a export company and store owned by a Japanese businessman Mr. Ogino. The 35mm coupled rangefinder camera with selenium cell light meter was priced between $40 - 60
US in 1957. It was also exported out of Japan by Ogino under the names Hanimex in Australia, Wirgin in Europe, Brumburger and Mansfield (Argus) in the USA, Hiyoca and of course sold in Japan with the Ogikon name.
Thanks to the very knowledgeable Colin J Clarke for his assistance in providing me with info on this camera. Check out the Royal Camera Co. gallery for more photos of Royal Cameras (minus the Ogikon). If any one finds another Ogikon please contact Colin he is looking for one. 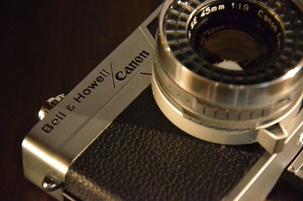 The Canon Canonet 19 was released in 1961 and is Canon's first entry into the intermediate-class camera market, and also the first of the highly successful Canonet series of 35mm automatic-exposure rangefinder cameras. The name Bell & Howell was added because they were the company that sold the cameras in America as Canon was until then a Japanese company looking to expand internationally.
The top plate only houses the shutter-release, with a locking ring for time-exposures, the frame counter and an accessory shoe. All the film advance mechanisms were on the bottom.
The selenium cell wrapped around the Canon SE 45mm f1.9 lens. The aperture ring is scaled from f16 down to f1.9, followed by an "auto" setting.  The Copal SV shutter has speeds from 1/500 down to 1sec, plus B. The film speedcan be set between 10-400 ASA by a lever in the shutter speed ring. 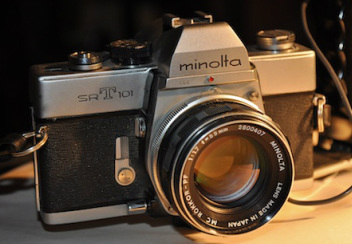 The Minolta SR-T 101 is a 35mmSLR camera made by Minolta Camera Co. Ltd. Japan, first built in 1966, it stayed in production with only minor changes for ten years, the result of the thorough development effort that was put into the camera. Built between 1966 & 1969: the first generation 101’s have a finely-knurled black shutter speed barrel chromed and have single slot screws holding the base plate and top cover on, while later generations use Phillips head screws. From 1966 into 1967, the two screws at the back of the top cover were the same distance from the eyepiece, while on all later SR-T‘s the right-hand screw is farther away from the eyepiece. 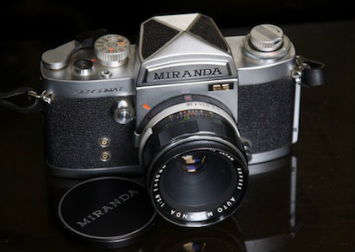 1969 saw the launch  of the Sensomat RE by the Japaneese camera company Miranda.
In the 60s they were highly regarded as the chief competitor against Nikon as a system camera.
The most interesting thing I think the Sensomat RE has is an interchangeable prism viewfinder that can be converted from an eye piece to a waist level viewfinder. It had TTL, (Through The Lens) metering with bottom-weighted averaging (to eliminate overexposure problems with bright skies) which was operated by pushing a button on the front of the body. It also had two shutter releases one up top and another next to the lens. The camera also accepted bayonet and screw on lenses.
Unfortunatly the company went out of buisness in the late 70's. 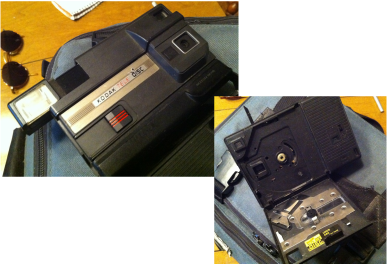 Anticipating the digital age Kodak introduced the Disc format in 1982. In the first year of production 8 million were made. Kodak's Tele Disc camera was in production from 1985 - 1990 and cost $58. The line of cameras used VR Disc film that had ultra small
8 - 10mm negatives on a disc for quick loading.
Kodak Disc cameras were fitted with aspheric lense, this particular model fitted with two lenses, one 12.4mm f4 for regular and a 22mm f5.6 for telephoto. When the flash was popped out the lens changed to telephoto. A fold up cover protects the lens when not in use. This model is powered by two AA size batteries.
The extremely small negatives produced a less than optimum picture quality. Barley good enough to produce an decent 8 X 10 inch print. The disc film ceased production in 1998. 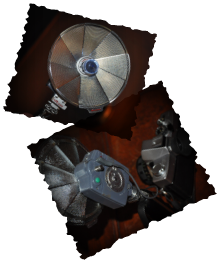 This flash bounced light with the use of the folding metal flash reflector. It plugged into the flash terminal on the side of the camera shutter. A folding flash unit, manufactured by Ricoh in the 1950s. The unit is powered by two batteries, a 22.5V and a 6.5V. A central adapter plug allowed to switch between the use of M2 and Bayonet style flash bulbs. The flash could be used on and off the camera this one attached to a vintage flash bracket.

Back to Camera Collection, next Motion Cameras